When I joined OpinionPanel I was keen to know about two aspects of the business. First, how effective is an online panel of students and graduates as a means to providing access and reach to the student population and second how accurate is the data collected via an on-line survey? I am relieved to report that I have been pretty impressed and am feeling more assured and confident than I did several months ago! 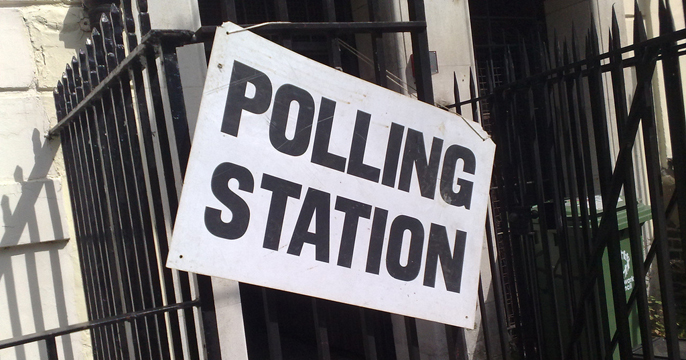 When I was a student myself (sadly, several years ago now!), I was convinced that I mattered and my voice should be heard. On reflection, those in full time education may only comprise of 1 million of the overall population however in marginal constituencies the student vote has the power to swing the outcome. Students represent many of our future opinion leaders and formers and hence measuring what they say and feel today provides crucial and significant insights of what may transpire tomorrow.

By reviewing and reading through OpinionPanel data on student voting behavior I have discovered that they are top of the class when it comes to understanding and predicting the attitudes and behavior of the student population. They managed to track the increase in likelihood to vote as Election Day approached and pinpointed the significance and impact of the live leadership debates on student opinion. In the months leading up to May 6th, whilst the hype surrounding Nick Clegg and the Lib Dems did not translate into Lib Dem success among the electorate as a whole, OpinionPanel measured and recognized the significant increase in student support for Nick Clegg and the Lib Dems which held firm on voting day.

If you are not yet convinced, take a read through the details below to learn how OpinionPanel demonstrated to me that an on-line panel (particularly one that is managed in such an effective way) provided an effective tool to measure the thoughts, feelings and likely behavior of the student population.

OpinionPanel communicated how likelihood to vote* increased from three in five (61%) in late March to nearly three quarters of the student population (71%) in late April – a measurement that OpinionPanel successfully matched against the actual turnout on May 6th (71%).

*The likelihood to vote figure is based on all those who answer 8-10 when asked how likely would you be to vote in an immediate General Election.

Impact of the televised leadership debates

OpinionPanel also documented the impact of the leadership debates on student opinion and measured the proportion of students who watched the debates and changed their voting intention as a direct result of watching them.

We reported that two thirds (63%) of all students (who were likely to vote and had seen at least some of the debates) said that watching them had helped them to decide who to vote for. OpinionPanel reported that overall, around one in ten students switched allegiance to Nick Clegg, at the expense of both David Cameron and Gordon Brown during this period. (Fieldwork dates: 26-28 April 2010)

OpinionPanel measured party preference* throughout the election campaign and our final prediction of voting intention accurately matched the actual voting figures on voting day. By the end of April (prior to the third leadership debate) we communicated that the proportion of students who would vote for the Lib Dems had increased significantly with half of all students (50%) who were likely to vote intending to support the Lib Dems. At the time, we predicted that if a General Election was held tomorrow that only one in five of all students (20%) would have supported the Labour party and a similar proportion (21%) would have given their support to the Conservative party. (Fieldwork dates: 26-28 April 2010)

Thus illustrating how OpinionPanel could efficiently and successfully read the behaviour and intentions of the student population, for on May 6th, the Lib Dems received almost half (48%) of all student votes whilst the other two main parties only received almost half this number of votes (with just one in five (22%) of the student population voting for either the Conservative or Labour parties).

*Note that all party preference voting figures are based on all students who are very likely to vote (score 8-10 on voting intention) and excluding all those who do not answer, say don’t know, or who would not vote in a General Election. 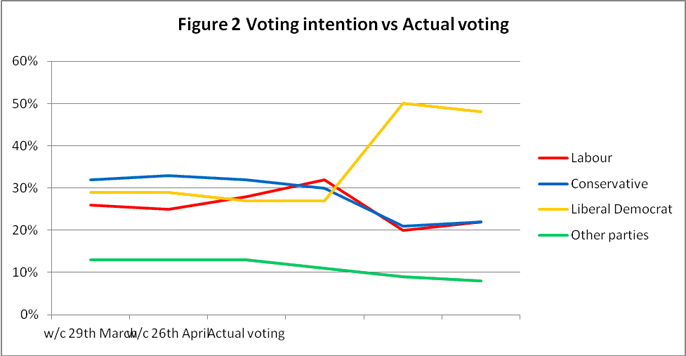 OpinionPanel has continued to track student voting intention and attitudes towards the most current and prolific issues affecting the student population since May 2010. We have observed how the political landscape across university campuses has begun to alter and shift, with a recent sharp decline in the proportion of students who would currently vote for the Liberal Democrats if a General Election was called tomorrow. Student support for the Lib Dems had leveled at 29% during September and October among all students following on from the election and the formation of the coalition government; however, by November support dropped significantly with only one in seven now stating that they would vote Lib Dem (14%). OpinionPanel has gauged and measured student opinion as their support for both Nick Clegg and his party have ebbed away and will continue to successfully monitor the abrupt shift in this relationship given the current emotive and highly-charged debate around tuition fees.

All fieldwork was conducted via OpinionPanel’s Student Omnibus survey.

Sample size for the omnibus survey was between 1,000-1,100 respondents. On average, students from around 125 higher education institutions took part in each wave of research. The respondents questioned in the fieldwork for this report were members of The Student Panel. Nearly all had been recruited to the panel via invitations from UCAS. All respondents had their academic email address (ending ‘ac.uk’) verified by Opinionpanel. All respondents were credited with £1 in Amazon Gift Certificates for completing each questionnaire. After completing a Student Omnibus Survey, respondents are excluded from at least the next 3 omnibus studies.

The voting dataset has been weighted to ensure the each omnibus is representative by gender and university type. Quotas and weights were set based on population returns supplied by the Higher
Education Statistics Agency (HESA).

Prior to the 2010 General election (waves up to and including 63), students were asked at Q1v to rate their likelihood to vote on a 1 to 10 scale. Those answering 8, 9 and 10 were considered likely to vote. The charts in this report add a further qualification when looking at party preference, that at Q2v they specified a party who they would vote for ie. didn’t respond ‘Would not vote’ or ‘Don’t know’. 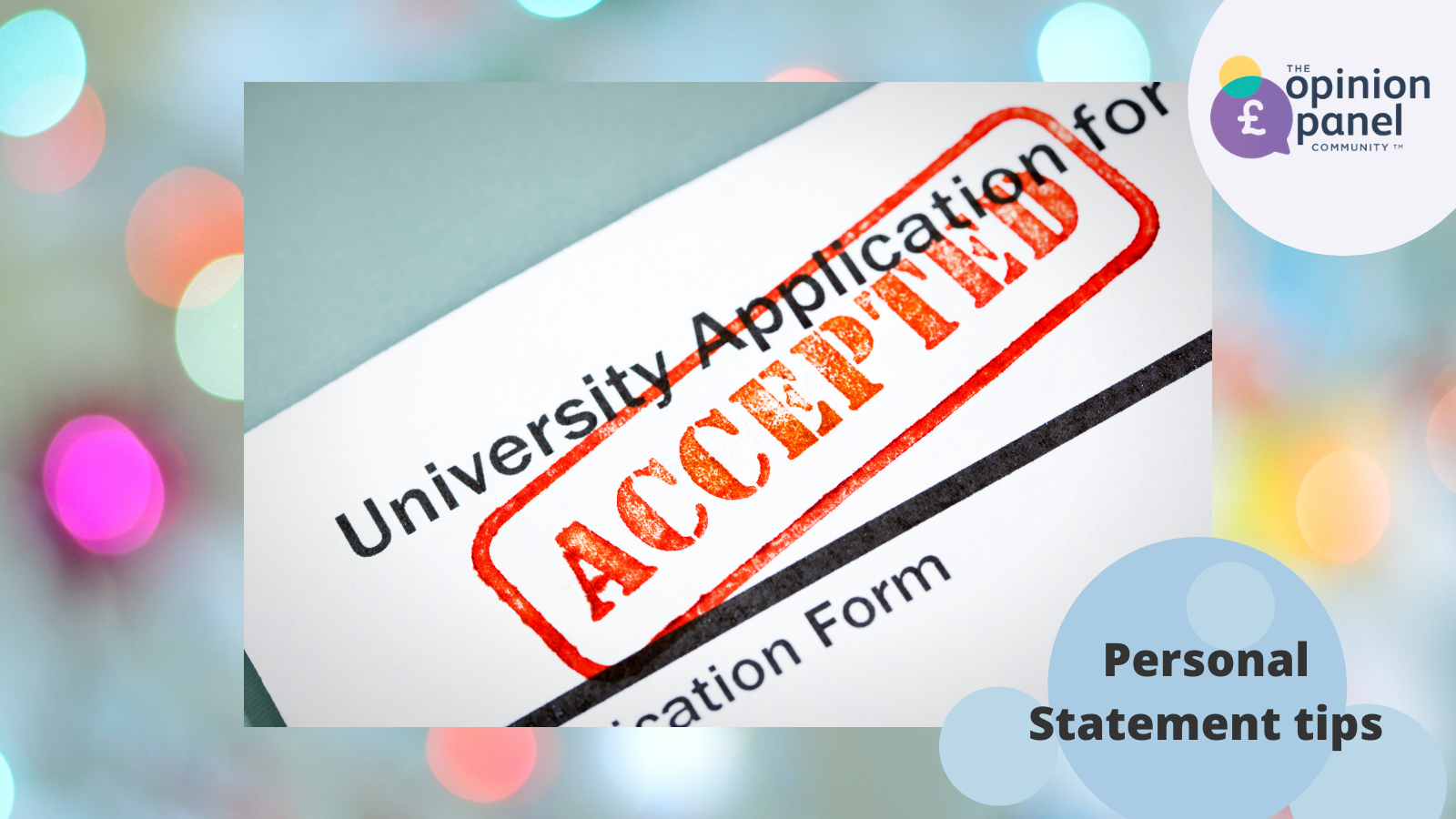 After getting onto a course that is arguably one of the most difficult in the UK, I hope to shed some light on how I wrote […] 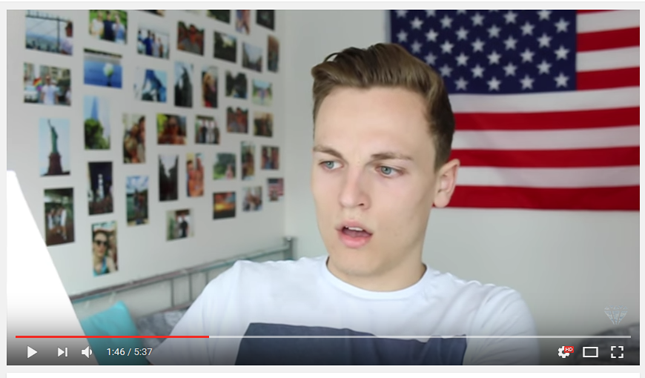 Results day was, without hesitation, the worst day of my life. As you’ll see in my video below, I went from rock bottom, to cloud 9, to […] 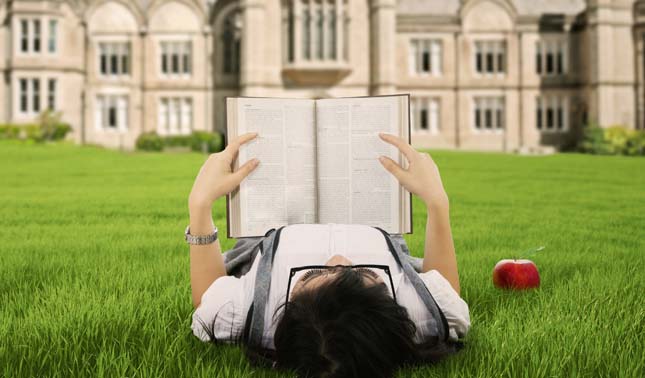 Top tips for making your firm and insurance choices

You’ve written your personal statement, pondered at prospectuses and finally submitted your UCAS application. While you wait for your offers to come in, we teamed up […]