A story about a human and a vampire falling in love was always going to be a hit story. Having an epic romance that is forbidden has always been a winning formula when it comes to fiction, Shakespeare had Romeo and Juliet whilst Emily Bronte had Wuthering Heights. 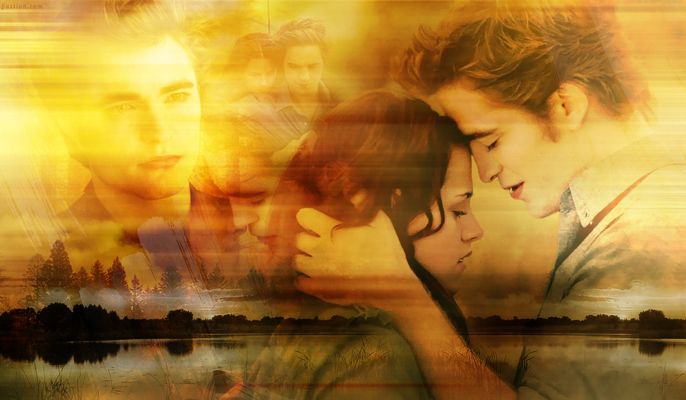 But both Shakespeare and Bronte were able to create characters who readers become invested in. Edward Cullen and Bella Swan on the other hand, are one dimensional characters who are painfully dull and their epic romance promotes domestic abuse and stalking. The Twilight saga provides no real character development or even a proper story; yes a teenage girl does fall in love with a sparkly old vampire, but aside from a small scare from the worst vampire mafia ever created as well as an awful excuse for a love triangle, nothing else actually happens. So what is it about the Stephanie Meyer’s novels that make them unsuitable for young adults?

“There was a faint shadow across one of my cheekbones, and my lips were a little swollen, but other than that, my face was fine. The rest of me was decorated with patches of blue and purple. I concentrated on the bruises that would be the hardest to hide — my arms and my shoulders. They weren’t so bad. My skin marked up easily. By the time a bruise showed I’d usually forgotten how I’d come by it. Of course, these were just developing. I’d look even worse tomorrow. That would not make things any easier.” (Twilight: Breaking Dawn pg. 95-96)

Reading this quote on it’s own, not knowing it’s context, you would think it is an extract from an account of domestic abuse, but it is not, instead it is a direct quote from the last book in the Twilight series. Bella’s bruises are shown to be marks of Edward’s ‘undying’ love for her, but if you take a step back from this the bottom line is that Edward has physically harmed Bella during sex. You cannot look through rose-tinted glasses here, Meyer is actively encouraging young girls to feel like they can accept men hurting them physically, because deep down they do love you really. What is even worse is that Bella then goes on to try and make Edward feel better about him hurting her, showing even further how placid women should be when faced with physical abuse.

Stalking is also a major feature of Meyer’s Twilight series, as Edward frequently watches Bella at night and follows her to Jacksonville where he conveniently manages to turn up at the right time and ward off some dodgy looking men who are leering at Bella, by growling at them. Now excuse me for not going weak at the knees at the thought of a creep, who you thought hated the very thought of you, randomly follows you to a completely different town and saves you from being attacked. Yes it is the standard format of the hero saving the heroine, but surely Bella could have at least done something! Edward watching Bella sleep, even when they aren’t even a couple, is also incredibly creepy and weird, emphasising Edward’s domineering presence over Bella.

Exploring this notion further, Edward has firm control over their relationship, which seems to be an absolute turn on for women (see Fifty Shades of Grey, which originally was a fanfiction of Twilight and is another horrendous piece of literature that encourages women to sign contracts which mean they have to keep themselves lean and fit in order to keep their man). A women’s desire for a strong man who seizes her in a moment of passion has dated back for years, with numerous male leads being a bit rough around the edges, but never do these men watch their every move or treat them like a museum artifact that cannot be touch as it will break.

Yet what is even more infuriating is that Meyer herself claims to be a feminist. In an article posted on The Guardian website, Meyer claims, ‘I love women, I have a lot of girlfriends, I admire them, they make so much more sense to me than men, and I feel like the world is a better place when women are in charge. So that kind of by default makes me a feminist. I love working in a female world.” Meyer genuinely believes that because she loves women and admires them, she automatically is a feminist. Nowhere in the article does she mention about equal rights for women or anything else that the principles of feminism are based on. Instead focus is placed on the fact that she got married at 21 and then had children. Not your typical feminist discussion points.

Overall, though many argue that the Twilight series is just teenage fiction and shouldn’t be taken so seriously, I strongly believe that Edward and Bella’s romance should be taken with serious consideration. Unknowingly young adults, girls especially, are believing that abuse in relationships is completely normal and should be accepted.

I’m Asha, and I’m excited to introduce myself as your new Community Manager.  It’s my job to make sure you’re all happy panellists! Together with […]

Ten Pieces of Advice for Parents… From a 20-Something

It feels like the more I look back on my teenage years, the more I wish I could not only give myself advice, but my parents […]

Is It Possible to Balance Relationships and Studies?

Striking the right balance between your studies and relationships is not a joke. First off, you cannot downplay the importance of your grades. (your parents will […]