The notion that women should be allowed to freely express themselves through their appearances goes hand in hand with fashion. For years, designers have been borrowing from this ideology in order to create seasonal lines which appeal to women, whether it is through celebrity endorsement or the stigma attached to the label, it has been a quick fire way of creating a mass following and allows women the opportunity to confidently dress for themselves. Not for male counterparts.

Fashion mogul Alexa Chung openly describes herself as a feminist and supports equality of genders. Most recently being pictured in Whistles controversial ‘This is What a Feminist Looks Like’ shirt, thus drawing her international male and female fan base toward the idea of feminism, diminishing the inaccurate ‘ugly’ image it once bared. As positive as this image is, it lends itself to the idea that younger generations will not be supporting the feminist movement due to the scarily large cases of gender inequality that come with it, but because it is fashionable right now, a controversial image may gain you more followers perhaps? This is not the label that should be worn as a feminist, there should be no label.

During the Spring/Summer ’15 Paris Fashion Week, major fashion house Chanel followed the women’s liberation suit. The catwalk did not have a feminist ‘theme’, instead it can only be described as a feminist and fashion parade. Under direction of designer and creator Karl Lagerfeld and led by model, actress and feminist Cara Delevingne, the catwalk saw models recreating scenes of teen revolution in the streets in the 1960s, each model proudly clutching and waving a picket sign reading statements such as ‘boys should get pregnant’ bringing the notion and reality of feminism right back to the 21st century. 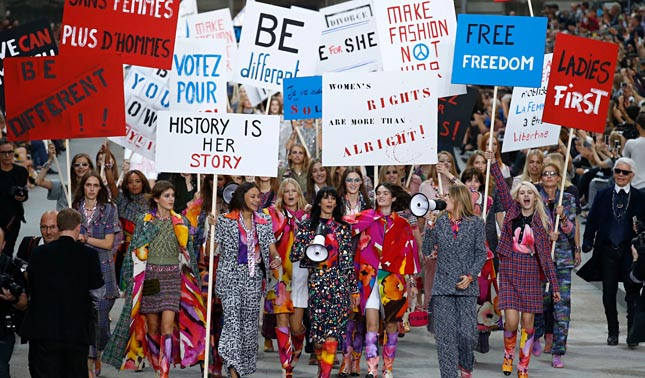 Do you think fashion is helping nipple freedom?

The mere fact that prestigious designers such as Chanel are boasting this image of feminism shows that the movement is fashionable but not a trend. A movement like this has been well overdue, the ‘Dapper Laughs’ controversy reignited our reasoning for becoming a feminist, popular culture industries are fighting each other with conflicting views, becoming offensive and degrading is now fashionable, and the fashion industries are fighting against this.

Through the means of social media, feminist campaign ‘Free the Nipple’ has flourished. The purpose – to remove the sexual stigma attached to the image of female breasts in comparison to a male. The campaign itself has sparked rallies across America and the United Kingdom with women bearing their chests in protest of the sexualisation of their bodies for the benefit of the male gender. Free the Nipple has produced a short film, to be released in independent cinemas featuring real life footage of women facing the backlash from society when presenting their ‘areolas’ in public.

When it is given enough thought it is made apparent how unfair it is that a male should have the right to ‘go topless’ in public without receiving any form of negative repercussion. The male torso is not as ludicrously sexualised as that of a women, deriving from the 1940’s ideology that a woman is the property of a male, therefore her body is there for the sexual arousing of a male counterpart. Their argument is, why are women’s chests censored? What is there to be afraid of it is just an areola with the function of feeding a child; sorry if that is too hard for you to get used to. Evolution did not give women breasts in order to sexually arouse a male, they serve a purpose but society fails to share this progressive view.

The industry of fashion have greatly endorsed this campaign, the aforementioned Alexa Chung along with Lena Dunham and Miley Cyrus have all openly recognised the movement, showing consolidation in the form of wearing the official #FreetheNipple t-shirt, which shows a woman’s chest being censored in a negative light. For the braver followers of this campaign, Free the Nipple also have the ‘tata top’, a bikini top with an image of women’s breasts showing, in order to ‘cheat’ censorship, even an image of a female breast is more acceptable than an inescapable feature of the female body. Tens of thousands of men and women have followed the Instagram and twitter accounts of FreetheNipple, so now when told my scared misogynists to cover up they may well be told to piss off and smell the equality.

equalityFashionfeminismin the news
Rate this Article 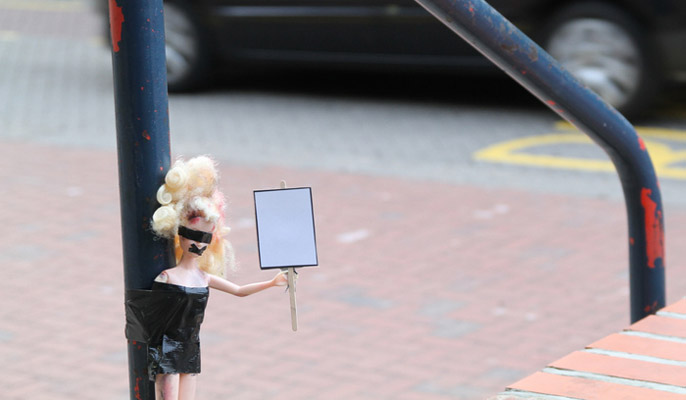 The Page 3 uproar had nothing to do with feminism

It’s great for the campaigners at No More Page 3 that change has finally happened, but I don’t really view the event as a mark of […] 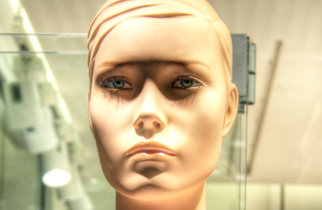 For centuries a social phenomenon has existed whereby all humans within a set culture must wear similar, usually uncomfortable, clothing. Now, with globalisation sprawling across the […]