You’ve been entered into a monthly giveaway to win a £50 shopping voucher! 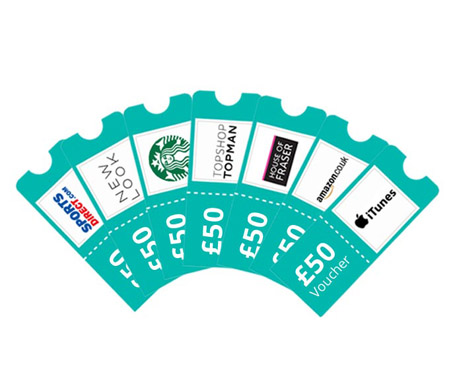 Screening out of surveys sucks. But to make it up to you, every time you are screened out, you’ll be entered into a prize draw and have a shot at winning this awesome prize.

If you are the winner you’ll receive an email notifying you and a voucher code and instructions on how to use it to redeem a voucher at the store of your choice!

Keep an eye out on your inbox towards the end of the month!

"Thank you so much, I didn't actually think I'd ever be chosen but I'm really glad to have been!"

"It was very unexpected to win this prize! Definitely perked my mood up, you often forget you get entered in to these prize draws so an awesome prize! Thank you"

"Wow this is truly amazing, I never dreamt that getting screened out of a survey would lead to winning £50. Thank you so much!"

"I am really happy and I’m grateful for the voucher. Thanks"

"I was flabbergasted, stupefied and gobsmacked when I saw the email saying that I'd won! So happy to receive this and nice to know that it really can pay off, filling in surveys over the years!"

"Thank you so much! I'm surprised I won and I look forward to taking part in more surveys in the future"

"Thanks very much, this is very exciting!"

"I have started competing these surveys because a few of my friends did, but I never thought i'd actually win!"

"Thank you for this! I'm really chuffed and I'll definitely keep taking part in as many surveys as I can in the future."

"I’m very happy to win. I didn’t know you could get prizes when you screen out of the surveys which is a bonus."

"Being a first year undergraduate student, things are always tight so winning the monthly screen out prize is an amazing surprise that means I can treat myself and my loved ones on the run up to the new year"

"I actually cannot believe I have won, thank you!”

"I was having a terrible week and this was a great pick-me-up. Thank you!"

"I wish to extend thanks and gratitude for this gift."

"Thank you very much for taking the time out to acknowledge my efforts, even if I didn’t manage to complete the survey for you! I can’t wait to spend the prize money!"

"I honestly can't quite believe that it's real. The last week has been an absolute nightmare, so this has really made my day!"

"Id like to say that ‘I feel so fortunate to have won this prize. Thank you OpinionPanel!"

"What a lovely suprise! It has definitely been worthwhile sighing up to this site!"

"I'm delighted to receive this prize!"

"Thank you very much for those great news! I never usually win things!"

"Thank you very much, was never expecting to win but I am very happy"

"Thank you!!! I never win anything so I didn't expect this."

"This has been a nice surprise and I feel excited and grateful."

"This is great news, thank you!"

"Gosh, Thank you so much. This is just so out of the blue. I didn't think I'd actually win something"

"I was delighted to hear that I had won the Amazon Fire Tablet. It was disappointing to be screened out but winning this prize really made my day"

"Traveling home after work to read that I've won a tablet - absolutely amazing! Thank you OpinionPanel"

"I am very glad to hear that I won a prize!"

"Thank you very much!"

"Thanks very much for the tablet!"

"I am extremely surprised to win the prize!"

"I am so pleased to win the prize, it just goes to show you it's well worth the time to fill in the surveys!"

“Amazing! Just what I need to accompany me on my long commutes, thanks OpinionPanel!”

"I'm sooo happy that I've won for this month. Thank you OpinionPanel, I never thought a screen out would mean a prize. Just made dissertation time a bit easier."

"I'm over the moon that I've won this Kindle, I never win anything really!

You never think you'll win, do you? Worth the time though!

Timing could not have been better as August is my birthday month. Thanks Opinion Panel for the prize!

"What a pleasant surprise. Thanks!"

"Wow, I never win anything. This definitely dwarfs the £2 I won on a scratch card"

'Really happy to have won the kindle, have never won a competition before, will be a great aid to my studies!'

"Thanks OpinionPanel! Prize winner just in time for some reading on the beach"

"I never really expected to win anything, so thank you so much for the Kindle!"

"Thanks so much OpinionPanel! I can finally stop using my boyfriend's kindle!"

"So happy with a survey site that gives worthwhile rewards and ones that are perfect for students!"

"What a pleasant surprise! Thank you, Christmas has come early!"

"I am really pleased to have won, absolutely over the moon!! Thanks Opinion Panel!!"

"I can't believe I won! Getting screened out is so annoying but this makes it kinda worth it lol! Thanks Student Panel!"

"Wow I have never won something this way, thank you very much OpinionPanel!!"

"I'm so surprised I won i never win anything lol"

"I'm shocked that i won, and really glad i take part in these surveys as they help me a lot"

"Thank you for this amazing surprise, OpinionPanel!"

"Thank you so much!"

"I thought that no one won these prizes but it turns out they do! Thank you!"

"Great opportunity not only to participate in research, but also to win valuable prizes. "

"I was very surprised but incredibly happy! Thanks Student Panel!"

"Thank you so much!"

"Thanks for the prize, that's amazing!"

"Thank you very much, I've wanted a Kindle for so long."

"Thank you very very much"

"This is such a nice surprise, thanks OpinionPanel!"

"I'm really grateful to have been awarded an Amazon Kindle!"

"Are you serious?! Have I actually won?! That's amazing!! Thank you so much!!"

"Thank you OpinionPanel for my new kindle!"